As the chalk dust settles on our National Championship last Saturday I would like to express thanks to a large number of people. I will start with the competitors , without who there would have been no competition! You came from far and wide – Russia , Canada , the ACT , Queensland , Victoria , NSW and yours truly from Tasmania. Thus we are well on the way to offering a sought after Open Championship of Australia , and urge the other states to form clubs and organise teams to experience the buzz of a big contest.

Clearly in  a country as large as Australia it requires a dedicated athlete to travel 4-6 hours to an event where he/she gets to play for only 10 or 20 minutes . However I have always viewed competitions as an educational and social experience , as well as a chance to test training methods and exhibit one’s dedication to a chosen event. What happens before and after can be as memorable as what occurs on the platform and in the warmup up or spectating area. View a competition as a sort of working holiday for sportspeople – you get the idea?

Jad Marinovic opened her gym doors so we could host this party. In fact , at personal cost she closed her doors to regular clients for several days to enable this event to take place. She facilitated the simultaneous occurrence of a visit by IKSFA legends Sergey Rudnev (“Yoda” – 20 years experience teaching , experimenting and competing with kettlebells) and the man you would always want by your side in the trenches – the indomitable Sergey Rachinskiy. These men give tirelessly of their time, really for the love of what they do and the rich experience of travel - worth more than money!

Whilst some people were lucky enough to attend the Level 2 academic  certification , Jad also lent her gym so that one on one instruction could be provided for those with other commitments or circumstances. Her well organised Kettlebell Athletica facility, quite cosy with the excellent attendance , imparted an exciting ambience somewhat lost in larger venues. Like a band performing in a pub as opposed to an arena , we were immersed in some fantastic lifting . Audience participation always ensures athletes drip that extra sweat and tears (and palm tears with resulting stigmata). 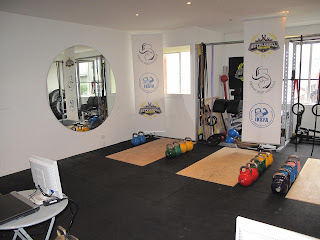 IKSFA recently published their comprehensive rule and regulations for competitions . This compliments the ranking system adopted by our committee in late 2011. The rules are firm but fair , reflecting changes in the sport over recent years and enabling us to aspire to an overall higher standard of lifting .  For some years I have been aware of band of internet based couch lifters who love to criticise judging and athlete performance ; I will call them out as predominantly a bunch of average performers who have not volunteered to enjoy the often thankless , necessary but strangely rewarding task of judging, let alone competing. The GSAA is relatively new and everyone is gaining experience.

The assistance from the Sergey’s was a golden opportunity to learn the nuances of the rules and gain feedback from our performance. One other point of relevance to this discussion – GSAA aims to strictly judge those attempting higher ranks that reflect a serious national team standard GS focus e.g. CMS and above. As the sport remains novel in our country , we are not about discouraging new performers by no counting every 2nd rep ; the general rule is the athletes are encouraged and if they show safe and good albeit not perfect technique their reps will count. One point ; if an athlete is able to make 27-30 reps per minute it is very difficult for a judge to assess fixation – even the world champions do not always stop the bell on a dime as it were! A judge wants to see lockout (e.g. knees straight , and not pressing in a lift entitled jerk) as well as safe control of the bell. Safe for the athlete in the short and long term as well as safe for adjacent competitors and the judges!

If you are working at above 25rpm , probably it is time to start competing with heavier bells. These will definitely stress the need for perfectly efficient technique.

In any case , it was great to see new competitors on the same platform as quite seasoned lifters . It took me back to my Latvian odyssey in 2008 , sharing the stage with Ukrainian legend Fedor Fuglev!  Incredibly humbling for me,  but at no stage did I feel intimidated or belittled by the other athletes -  nor the judges or audience. On the contrary , I vowed to train smarter and seek out the best advice. Not just one person’s advice , but a variety of expert people who understood how to tailor training to my physique and physiology, my opportunity to train and not the least accommodate my “old age” restrictions. It is an ongoing quest and life in general is something that often gets in our way as we try to achieve our own idea of perfection.

The majority of competitors seemed happy by their results. Some did much better than they expected ; they used the adrenaline of competition well!.  Others experienced the disappointments almost all gireviks have felt – losing the bells , tearing palms , not achieving the goals they had set etc. Not to worry , you came with the right attitude , competed with great spirit , courage and energy - and enabled us all to learn from each other. It is this collective energy of cooperation that will grow the Association and this sport in Australia. As you know , and something which heartens me greatly , Australians are great sportspeople who love  a good scrap. Even if it is with ourselves!  Individual sports are always tough because we fight our own egos simultaneously with the demons of the platform. And I am not talking about the judges , they are to be regarded like teachers , firm but fair and just doing their job under trying circumstances! 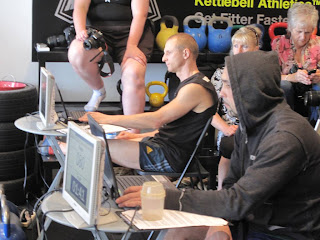 We must not be complacent in our push to get our best athletes on the world stage as a team. But it is sobering to realise we remain a long way behind the eightball of the non-minnow nations. Rudnev told some of us that at one Russian competition he attended in 2001 , there were 220-odd athletes  lifting 32kg – and 44 men in his bw category alone! So those firing shots across the bows of the novice competitors and judges should consider their status in land of competition proven expertise. And we should work hard to establish proper weightlifting clubs with well equipped gyms. 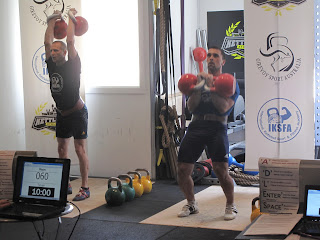 I hope the foregoing paints a fair perspective of our kettlebell sport situation. Our 2012 competition was a fabulous learning opportunity and awesome social event. All who were involved , including coaches , athletes , judges , competition assistants and the behind the scenes committee volunteers can rightly feel proud of the mark they have made. In years to come you will remember your contribution . And rather than become a “the older I get , the better I was “ person , you should aspire to becoming a playground legend once again – just like our amicable , knowledgeable and fearsomely competent guests , the two Sergey’s from Russia.

Given our population , 32 athletes was a tremendous turnout – equivalent to several hundred in Russia or the USA. Athletes from 14 years to the 6th decade represented the future of the sport at junior , open and masters level. Given the sport’s exponential growth , next year we will have to carefully consider our venue and categories of competition. It is an exciting and challenging time for all involved. 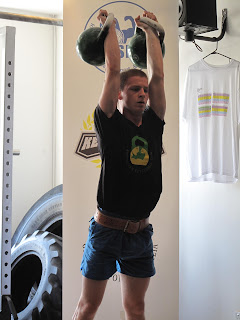 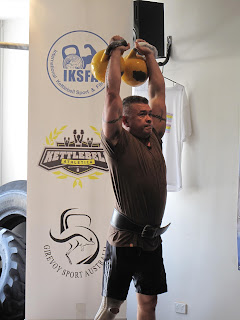 On behalf of our Association and our sport , thank you to everyone that has helped us get to this point. The coaches who prepared teams are to be commended on their personal sacrifices to make this important facet of sport development and competition work. Stick with it and please phone or bring a friend next time!

Next up will be some interesting interviews...

Posted by Girevoy Sport Australia Association (IUKL) at 02:36 No comments: